The use of tea in cocktails is well established in the States, and a growing trend over here. But as Laura Foster discovers, hard and fast rules are tough to come by

Tea: the nation’s favourite drink. The beverage to which the UK turns when commiserating, celebrating, or having a chinwag. If the national purse had a pound for every time someone said the phrase ‘Put the kettle on’, the current recession would be a thing of the dim and distant past.

But recently, camellia sinensis has been transcending its place in our kitchens and living rooms and finding a new home in bars around the world, making its way onto cocktail lists as an increasingly attractive ingredient for mixing.

From an alcoholic iced tea list at summer hipster hangout Dalston Roof Park, to the use of frozen tea ice balls by Midori global brand ambassador Manuel Terron at Imbibe Live, by way of infused teas sitting in teapots on display at Bar 45 on London’s Park Lane, there’s no holding this most humble of brews back.

As with most bartender-led trends, brands have been jumping on the bandwagon in the last few years. Some have partnered with tea companies, including Bols Genever, Hennessy and Beefeater – while others have released tea-flavoured products. Absolut has not one, but two: Wild Tea and its Absolut Craft Smokey Tea vodkas (the latter of which was created by tea evangelist Nick Strangeway). And that’s before we even turn our attention to Tatratea, whose Slovakian tea liqueurs have recently hit the UK market.

Mixing with tea is not such a new idea. Its place in punchbowls dates back 300 years, as drinks historian David Wondrich explains. ‘The first mention of tea in punch that I have found is from 1718 in James Keil’s Medicina Statica Britanica, where he mentions, in a long list of daily drinks taken as some sort of medical experiment, “Punch, composed with green tea, was drunk at sunset”. The use of tea in punch became pretty standard, and it was the bedrock of punch-making by the middle of the 19th century.’

The start of its use in cocktails, however, is more mysterious – Wondrich mentions finding a few references in the late 19th century, including iced tea with a stick [shot of alcohol] in it, but he thinks that the concept was properly introduced about 10 years ago, crediting his friend Audrey Saunders of New York’s Pegu Club as being one of the key pioneers with her Earl Grey MarTEAni (see recipe overleaf).

‘In the old days, Dave and I were pioneering a multitude of things, and tea just happened to be amongst them,’ Saunders explains. The Earl Grey MarTEAni – created in 2003 – may be famous, but Saunders’ first tea cocktail was a Bourbon Mint Iced Tea at The Carlyle Hotel in New York; a similar, delicious drink is currently being served at new food joint Psychic Burger in London. 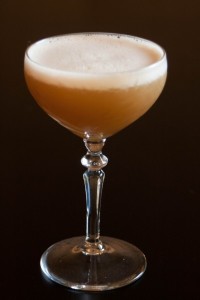 On this side of the Atlantic, developments are even more recent. Two of the key players in the story are Henrietta Lovell from The Rare Tea Company and punch champion Nick Strangeway, who she started working with in Hix in 2009.

‘I’d gone in to do some training on how to serve my teas with the staff, and Nick was there,’ she recalls. ‘He told me about how tea had first been used in punches, and got incredibly excited, because I was importing a whole-leaf, handmade green tea that’s made the same way for 3,000 years, and it would have been the original tea that was used in those punches.’

They started experimenting together, other leading bartenders such as Tony Conigliaro and Dre Masso were also sourcing top teas, and the rest is history – bars everywhere are pairing up with quality tea suppliers, be it The Rare Tea Company, Postcard Teas, Jing and beyond.

‘Every good restaurant nowadays has good tea, so the bartenders have it,’ says Lovell. ‘I’m going in and doing the training, and they hear and want to start playing around with it. The revolution is upon us!’

With revolution, of course, comes uncertainty, as people try to find their way in a new world order, and this one is no different.

The problem is that knowledge around brewing quality loose-leaf teas in the correct manner still isn’t widespread – different teas need different temperatures of water (never boiling) to infuse, for different lengths of time. And these principles are just the tip of the iceberg.

That, coupled with the sheer variety of teas available, has created confusion.

Mixing with tea is currently like riding out into the Wild West: it’s a lawless place full of contradictions and conjecture.

Lovell, for instance, believes only loose leaf teas should be used (‘Why would you use a cheap, shitty teabag when you can use such beautiful teas?’), whereas Wondrich uses both loose leaf and bags, and thinks that teabags are easy to handle.

Many think that infusing spirits with tea is one of the most effective ways of incorporating it into a drink, but Oskar Kinberg of Oskar’s Bar at Dabbous dislikes doing this as he worries about ruining perfectly good spirit in the process.

Saunders advises against creating tea syrups, believing that ‘The sugar content, along with its density, weighs down on the tea’s flavour profile and suppresses it,’ whereas Kinberg takes the opposite view, saying ‘It’s easier to balance how much you want out of the flavour if you have a syrup.’

‘It seems that tea can be used all ways possible, from infusion to suspension,’ says Tim D’Offay of Postcard Teas. ‘What it should do is add something to a drink – it has to have presence while working with the other ingredients. When I can hardly detect the tea, it seems a waste to put it in a drink, other than for the effect of the caffeine.’

Whichever way you decide to try and use tea, don’t let convention hold you back – the options are endless, as the four following drinks featuring its different uses demonstrate…

Method: Measure the ingredients into a mixing glass. Add ice, and shake hard. Strain into a chilled martini glass, half rimmed with sugar, and garnish.

*To infuse the gin, measure four tablespoons of loose Earl Grey tea into one bottle of Tanqueray. Cap and shake, and leave at room temperature for two hours. Strain through a fine sieve or coffee filter into a bowl. Rinse bottle to remove loose tea, pour infusion back into clean bottle. Keep refrigerated.

‘Despite the fact this cocktail utilises a tea that contains a lot of tannin, for whatever reason it is incredibly easy to drink. You can have a few and not experience palate fatigue. I asked Harold McGee, a world-renowned food science writer about it.  He explained that since I was blending both the tea and egg white in the shaker, the proteins in the egg white bound themselves to the tannin in the tea –thus preventing palate fatigue syndrome.’ – Audrey Saunders

Method: Place all ingredients in a shaker with ice, shake and strain into the glass. Garnish.

‘I prefer using teas as syrups. This one makes the drink floral and lighter. So the jasmine comes at the end of this drink and finishes it off, tying everything together. When making tea syrups, it depends on what I’m infusing as to how long I leave it for. Some teas you get loads of flavour from straight away, others take a while longer. Jasmine, is thicker so it takes a bit longer.’ – Oskar Kinberg

Method: Add ingredients into a chilled mixing glass and top with ice, stir and serve straight up, garnished with the cherry.

*Using a smoking kit, create a sandwich of oak chips and mulberry tea (with the tea in the middle).

‘The tea-smoked cherry idea was actually Dre Masso’s, and he told me to run with it. The garnish gives the drink a quiet smokiness that grows as you get closer to the bottom. I like to think of it like the destination you are heading to while riding on a train, growing ever closer with every mile.’ – James Estes

Method: All the ingredients are added to a large bowl (or jar with a tap) and stirred. Simply pour into a punch cup or rocks glass over cubed ice.

*Measure 28 tablespoons of loose-leaf oolong tea into four litres of water and cold-infuse it between four and six hours.

‘We’ve created a small list of alcoholic iced-tea cocktails for our bar. We can also make these drinks non-alcoholic: we just use the recipes without the spirits. I find that gin works best with teas because of all the botanicals in it. The Nectar Hive is inspired by Lipton Iced Tea; you’ll notice that the flavour profile is quite similar.’ – Louis Hyams, Background Bars

Top tips from those in the know:

‘Alcohol acts like hot water on tea – it sucks flavour out extremely quickly. A shot of white spirit only need 30 seconds of infusion at most, while dark spirits can take up to two minutes. Tea infused in water oxidises in minutes, while tea infused in spirits is completely stable. You have to make sure you strain it thoroughly: any particle of tea that comes through a strainer will still infuse in the alcohol.’ Henrietta Lovell

‘One size does not fit all. I utilise four tablespoons of Earl Grey tea for each litre of gin I use. If I’m working with jasmine, I might add five or six. It’s a lot of trial and error.’ Audrey Saunders

’I’ve tasted my share of cocktails that use exotic herbal teas, and that’s all you can taste. I had a bad experience once making a bowl of punch – I had an expensive case of batavia arrack airfreighted from Germany, and all you could taste was this mango tea I’d been supplied with. And beware the caffeine factor. I’ve had some horrible nights after drinking punch with tea in it all afternoon.’ David Wondrich

‘In the same way that you pair certain spirits with certain ingredients, the same can be done with tea. Lighter teas such as green and white ones can get overwhelmed by some spirits like cask-strength bourbon.’ Danil Nevsky, Tales & Spirits, Amsterdam