Another review filed from the field. This time it’s Pulp at Primavera for ClashMusic.com… 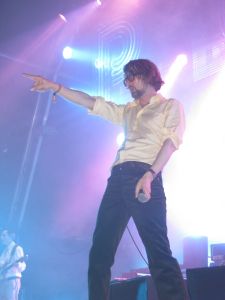 The excitement in the air is palpable (or should we say Pulpable?) for our reunited heroes from Sheffield during the Friday night of Primavera Sound.

Projecting messages onto a curtain that shrouds the stage, the iconic and ironic spirit of Pulp is clearly still alive. ‘Do you remember the first time?’ it reads. Yes, we do. And that’s why we’re so excited.

Finally the curtain drops, and the sordid sextet are back once again, under the blazing neon lights of their name. They may be older, a little wider, and a little more short-sighted (Jarvis isn’t the only one sporting specs), but they still know how to play a blinding set. This is a performance that delivers everything, kitchen sinks and marriage proposals included.

Rattling through the classics including ‘Underwear’, ‘Babies’, ‘Do You Remember the First Time’ and ‘This is Hardcore’, it’s the old familiar groove of ‘Disco 2000’ that gets everyone pogo-ing like it’s 1995.

Jarvis acts the ringmaster, happy to banter in the crowd, snake his way across the stage and pave the way for the aforementioned proposal; walking down to the crowd during ‘I Spy’ and pulling a pair from the crowd in order for some inspired chap to go down on one knee. We never found out what she said, but only a fool would say no to something like that.

In a 90 minute set stuffed full of glorious moments, it’s ‘Common People’ that delights the most. Jarvis dedicates the song to the peaceful protestors in Barcelona who were recently hospitalised by police. This, coupled with the sentiment of the song, drives everyone wild in a frenzy of nostalgic joy. What a treat.

And so it is that the band’s first festival appearance of the summer draws to an end with Razzmatazz, an odd choice perhaps, but one inspired by a Barcelona club of the same name that Jarvis and Steve Mackey used to frequent.

If Pulp are playing a festival near you this summer, go. They will not disappoint.

To see the full review on ClashMusic.com, click here.