The celebrated contemporary composer was premiering his first ever opera at the English National Opera when I interviewed him for Dazed Digital. 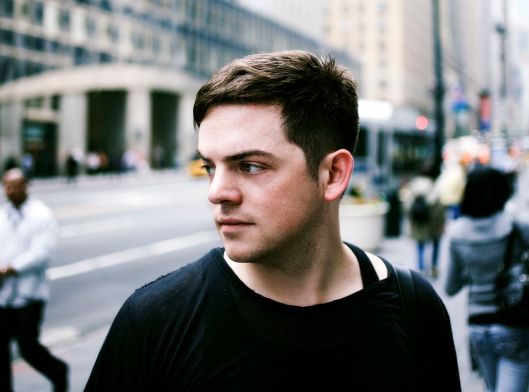 In his first full-length opera at the English National Opera, the New York-based composer’s cast sings in text speak

Two teenage boys huddle over laptops, conversing in text speak online. So far, so normal in our multimedia lives. Except that this is an opera, and the text speak is being sung at the audience.
Trust Nico Muhly to drag the opera world kicking and screaming firmly into the 21st century.
The much-feted contemporary composer, whose credits include writing the soundtrack to The Reader, is back with Two Boys, his first full-length opera production.
It is a stark, groundbreaking performance, set in the murky world of online chat rooms where nobody is as they seem and sexual predators lurk around every corner.
We caught up with Muhly to discuss the challenges of working on such an ambitious project.

DD: This is your first full opera. How much of a challenge did you find writing it?

It was a challenge, insanely stressful, but I felt very supported the whole time. Both the English National Opera and the Metropolitan Opera [who commissioned the work] were very institutionally and artistically supportive.
They helped me and Craig Lucas, who wrote the libretto, keep on top of it. The libretto is a 30-page document like a script, and once you start writing music to it, it really quickly gets out of hand. It grows like a fungus. So the challenge was keeping our eyes on the story.
Craig and I worked incredibly closely. What I was looking for from him was text that when I looked at it, I knew exactly what to write. I didn’t wanna have to fight the text. 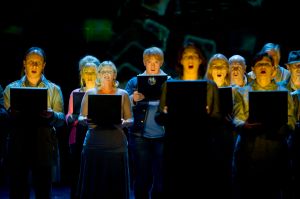 DD: Why did you decide to base the majority of it in the online world?

For me first of all, disguise is one of the oldest theatrical devices, be it political, sexual… they’re the part of the history of opera. So setting something online is really just an extension of that tradition, hiding behind guises.

DD: Do you think that using contemporaneous subject matter such as the online setting of Two Boys may help to attract newer, younger audiences to the opera and make it more relevant?

One can only hope. I don’t speak from any particular ability in being able to tell if something is or isn’t relevant. Relevance is more of an intangible concept that tends to follow quality, rather than quality following relevance.

DD: The staging, video production, lighting, music and words were so brilliantly interwoven in Two Boys. Was that due to the collaborative nature of the entire project?

Yes, that was one of the most special parts of it. We got to work with the design team from the beginning, they were very involved in the DNA of the piece. So the design hasn’t been applied cosmetically to the production like make-up, it’s a really fundamental part to it.

DD: What does opera as a form achieve in communication that other arts can’t?

It’s to do with the expressive possibility of simultaneous staging, the deployment of language and music.
This combination can elevate moments in a drama into a much more direct emotional space, so it’s not so much contemplative as it is immediate.
For me, the reason why Mozart operas work so well is because immediately you’re transported into the world of the Magic Flute in those first couple of chords. Music by itself oftentimes leaves it in the abstract, which is okay, and beautiful as well. But opera cuts an express line to the emotions.

DD: What’s next for you?

I have another opera that’s opening in November called Dark Sisters, it takes place in a polygamous community, and the government has come and taken away all the children. That’s another real-life story. When stuff happens, I very quickly write an opera about it.

To see the full article on Dazed Digital, click here.